Discovering Your Roots Can Boost Your Growth

The popular PBS program, “Finding Your Roots,” brought home, literally and figuratively, how familial roots run deep, offering insights from distant times and places. With his calm presence, the host, Henry Louis Gates, Jr., mesmerized his guests as he slowly unfolded the many layers of his research into their family histories. Uncovering unknown ethnicities, surprising vocations, or even family scandals afforded them unexpected insights into their present-day perceptions, behaviors, and choices.

Roots are also found in times and places nearer to us.  They arise from a tangle of family stories, events, and interpersonal dynamics that surround us throughout our lives and leave an imprint, should we decide to look. What we make of them is up to us, but to ignore our familial roots can be a lost opportunity for personal and professional growth.

But, I am getting ahead of myself. Allow me to begin at the beginning, so to speak.

Lost and Found in a Medieval French Village 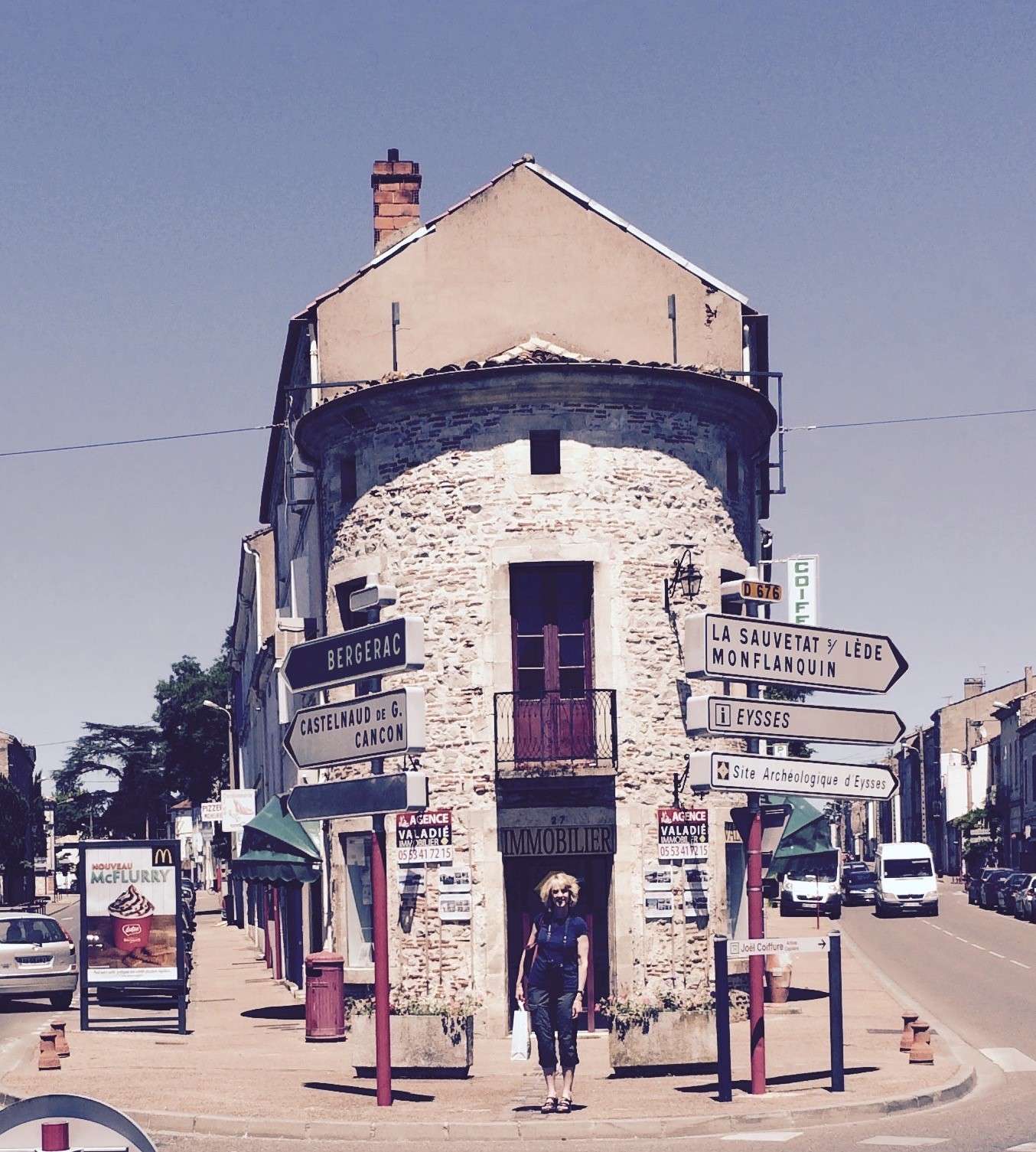 The Discovery. Three years ago, I made a long overdue visit to the French village of my great-grandfather. The address had disappeared from our family records.  All I had was the memory of a 40-year old photo of my father, aunt, and a French cousin standing in front of a small stone tower. Armed with that memory, my husband and I drove to the thirteenth century town of Villeneuve-sur-Lot.

As we entered the ancient town, our first order of business was to find a parking space near the crowded town square. Things looked grim until, by some miracle (or maybe not), I craned my neck to the left to peer down a side street. There, in my direct line of sight, stood a small stone tower that matched the old photo. The town historian later confirmed that it was indeed my great-grandfather’s watch shop.

I knew little about my great-grandfather other than he was a watchmaker, had two siblings in the Catholic Church, and around 1860, decamped in his mid-twenties to America.  I also heard that at age 13, the village priest booted him out of the Catholic Church after my great grandfather defiantly chewed the communion wafer. While the story might be apocryphal, the family tree sprouted only Protestants after that.

The Emergence of a Pattern. Staring at the tower that housed my great grandfather’s watch shop, I wondered how a young man from a remote French village in the mid 19th century could hatch the idea of moving to America, and then somehow get there. But he did. Once he arrived, he pursued various watchmaking ventures, including work for the Elgin National Watch Company. It opened for business just after my great grandfather immigrated to America and eventually produced half the pocket watches sold in the country.

I have more to discover about my great grandfather, but what I have learned so far struck a deep chord.  I realized that the entrepreneurial drive that defined him reappeared in both my grandfather and father who spent their lives building educational institutions. It continues into my generation with my three sisters and me who are all builders.

The Unexpected Gift from Discovering My Roots. Seeing that pattern sparked the insight that my lifelong, restless urge to try new things as emanating from ancestral sources, starting with my great grandfather’s itch to leave everything he knew to travel to a distant place with little in hand other than a talent for building watches.

While life inevitably has other influences, discovering my family history of pursuing the new as an organizing theme has been both validating and liberating.

The Stories of Two Executives and Their Roots

In my current life, I work with leaders who are themselves entrepreneurs. Striving for new, different, and better ideas comes with the leadership territory.  I customarily begin by asking about their personal history. While the subsequent work focuses on business challenges, the backdrop of the family origins influences current behaviors.

The stories of Michael and Richard come to mind.

Early Life Roots. Michael moved at age six with his parents from Southeast Asia to a suburban Seattle neighborhood. The neighborhood teamed with kids, all of whom were white and American born. Rather than remaining at a distance, Michael leapt into the throng, playing sports and behaving by their rules.  He did well in school. Afterwards he moved directly into the corporate world. When I met him, he worked as a mid-level executive.

His hard work and creative problem solving helped him to advance. At the same time, he had a dismissive style that his team found off putting. They further thought he did not adequately change his behavior to accommodate others, particularly in stressful situations. He and I met to discuss how to improve his leadership effectiveness in light of his team’s feedback.

The Impact. When I asked about his childhood, he began by glibly reciting a list of facts as if reading from a textbook.  Suddenly he stopped. After a moment, he began what seemed like a new conversation. He described how when his family came to the United States, he did everything he could to “blend.”   He did not want to stick out as anything different from the kids around him. He felt awkward coming from a different culture and did not want his insecurity to show.

This is not a new story. Young immigrants often have chosen to integrate into American society by discarding their histories, with mixed results. In the case of Michael, while telling me his story, his voice changed, taking on a tentative tone.

“I’ve never told anyone that before.”  He looked away and went on to explain how hard he had tried to be just one of the “homogenized white guys.” He hoped no one could see the struggle beneath. He stopped again and said no more.

An Opportunity Foregone. Soon after that he quit coaching, saying he was too busy. I understood his decision. There were places where he did not want to go.  Nevertheless, I couldn’t help wondering what would have happened had he been willing to peel back the defensive layers to reflect on the impact of distancing himself from family roots to conform to a new culture. With the benefit of accepting rather than avoiding them, he might have found it easier to connect more authentically with others through the thick and thin of business life. In the end, he chose a different path.

Richard’s Roots Lead Him Down a New Path

Avoidance of Roots. Richard chose another route. He had worked many years as a smart, capable finance executive whose team liked him. He also proudly admitted having little ambition beyond working his regular day and getting home to his family. He confessed to entering coaching only to win brownie points with his manager.

When we discussed his past, it came out that he was a native Hawaiian. Similar to Michael, he thought little about his origins. He left the islands to attend college on the United States mainland and never looked back. As with Michael, when asked to talk about his Hawaiian roots, Richard also stopped, then started a new conversation. Unlike Michael, the more he talked, the more excited he became.

Career Transformation from the Rediscovery of Roots. Over a series of conversations, he dug deeper into his Hawaiian roots. In fact, the more he dug, the more he recognized how much his Hawaiian identity and the feeling of being different from others had caused him to disengage from his career.

In reconnecting to his roots, Richard discovered an emotional center that energized him and led him in a new professional direction. He became a company diversity advocate, something that gave him meaning and purpose. He transformed from being an apathetic, albeit competent senior manager, to a motivating, engaged, and on-fire cultural diversity champion.

I respect the choices Michael and Richard made when confronted with their roots. I also have to admit to a bias based on the experience of others and myself that the lessons roots have to offer could well be worth the journey of learning them.

Available in the fall of 2018: The Journal of Not Knowing, a companion workbook guide to The Journey of Not Knowing: How 21st Century Leaders Can Chart a Course Where There Is None. To be used in conjunction with the Journey book or as a standalone, the workbook provides its readers with provocative questions, exercises and other tools to explore the Journey principles of navigating the unknown, dealing with risk, and the Core Four principles.