The Insularity of Anger: Brexit and the Barrier to Change

As I watch mesmerized at the fallout from the Brexit results I can’t help thinking about the power of anger and how it insulates people from its impact.  In today’s landscape, there seems to be no shortage of anger and its omnipresence is deadening forward movement by leaders and their constituents.

The “Leave” voters in England are angry at a government who they view as not protecting their jobs and economic security.  The “Remain” proponents are angry with the “Leave” crowd for voting against their ability to move freely around Europe for economic opportunity.  Both have much at stake.  Everyone is mad, really mad.   Neither sees any validity in the position of the others.

While we in the United States are in the midst of a presidential election rather than a decision to dissociate ourselves from a legal union with other countries, what we have in common is a large dose of anger.  Followers of Trump feel robbed of their right to have jobs.  Youthful followers of Bernie Sanders identify with his anger at the inadequate protection of the middle class.

I am not a political analyst or economist.  I am a long time observer of human behavior.  What strikes me is how the great and accelerating gridlock of anger is preventing movement toward change, something that is new, might work and with which most people can agree. 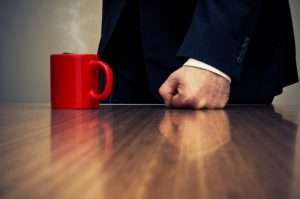 Anger is a powerful emotion.  One of its qualities is its ability to allow people to distance themselves from a person or situation and feel temporarily in control.   In reality, it is just another form of conflict avoidance that lets us stay stubbornly in place and not be moved into a situation where we might not be right.  Bullies behave this way all the time.  It is not that they know all there is to know.  It is rather they don’t want to know what they don’t know, or worse, have others discover that.  Then they would really be out of control.

When I am really mad at someone for saying a hurtful thing, stealing an idea or not supporting me for something that matters deeply to me, I don’t care about the consequences of my anger to them.  I don’t feel their feelings, only my own.  In that way I shut myself off from further information that might give me new insights, change my perception and catalyze change.   In other words, when I am cloaked in anger, I stop learning what it is that I don’t know that might make a difference.  The result is I don’t know what I don’t know and I have no interest in changing that.  So where do we end up when angry?  Nowhere.  Sound familiar?

I have little doubt that if any of us knew the magic drug that would return sanity to our current political climate, we would happily demand that everyone take it.  Alas, there is no such drug.  We do have the ability in our respective professional and personal lives to cause change.

We can start by honoring our anger.  It does signify something is wrong.  However, rather than using it to strike out, we can use it to find clarity.  What is it that really bothers us?  What do we actually know about a situation or person that is making us mad, and what do we need to learn?  Then we can focus on taking the time to go through the humbling process of finding out.   Armed with better information, and a cooler head, we can move forward, hopefully toward something new and better.