The Power of Clarity: Lessons Learned from the Perfect Pie

Just before Highway 62 makes a northeasterly turn in the direction of Crater Lake sits a Southern Oregon institution.  Beckie’s has graced that piece of highway since 1926, offering to its customers hefty plates of traditional gravy smothered American food and its signature dish, traditional berry and cream pies. 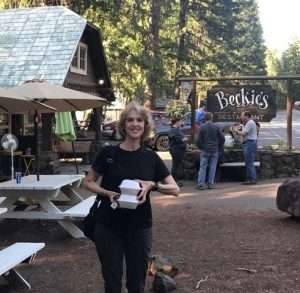 My husband (or, in restaurant review parlance, “my companion”) and I ordered pieces of the marionberry and cherry pies to sample. My husband, er, companion, who worked as a baker in his youth, sank his teeth into the first slice. Oh myyyyy . . . yes! Fresh fruit, not overly sweet and the crust was “complementary,” meaning it did not overwhelm. In short, Beckie’s lived up to its reputation and delivered a perfect piece of pie.

Why am I waxing quixotically on something so stupid as a piece of pie when there are far more important things happening in the world? Well, apart from feeling if you had tasted that pie you wouldn’t be saying that, I couldn’t help looking around and being impressed by the diversity of customers chowing down in the packed small restaurant–families with their kids, elderly people in wheelchairs, hip Millennial couples, Baby Boomers ignoring their latest diet restrictions, you name it. All were united by the love of a simple plate of honest food and . . . that pie. Straight forward, delicious and exactly as advertised. Oh, yes!

The Virtue of Clarity

The scene at Beckie’s also compelled me to gaze beyond our current days chock full of fear-based rhetoric and behaviors, augmented by the 24-hour news cycle, to a more regular life, less touched by dramas or innuendo. It made me wonder how we managed to make things so complicated.

As anybody who has spent more than five minutes with me knows, I love the new, peering under the edges of problems to figure out how to push them toward a different horizon. Even if I didn’t care about seeking the new, modern life demands it. Constant change spins around us. If you don’t shift, someone will shift things for you, whether it is your arch competitor, a new provider on the other side of the globe or a family member whose fixation on an old problem upends your current need for support.

While confused human dynamics are hardly new, the swirl of digital connectivity has accelerated people’s tendency to react rather than act in a thoughtful manner.  I’m not talking about social etiquette, but rather the lost art of striving for clarity to provide a beacon for directing our actions.

What Gets Lost in the Fight

I spend much of my time listening to businesspeople and friends grapple with what they want. They know something feels wrong with a situation, at least on the surface.

All of these situations are understandably perplexing and stressful. Where people get stuck is where to go from there. Too often, the next step is a tailspin of reactivity that deepens and widens. As is well known, stress causes a flight or fight reaction. Neither solves the problem, unless you find yourself in the tundra with a woolly mammoth in hot pursuit (hint: flee).

Most situations call for a more informed and nuanced response to find a solution. That’s where life becomes complicated if the people involved stay locked into reactivity. To move past it to action requires taking the time to clarify the situation by unearthing the facts and opinions that lie beneath. In other words, what do people genuinely mean and want?

Here are five ideas for converting reaction into action to arrive at a clear solution:

1. Stop, look and listen: Emotional reactivity is healthy. It says you are alive, because your senses are recording what is going on around you. Instead of deciding instantly what you think you see and executing accordingly, stop! Slow down, listen and observe. Hold a meeting with yourself to slow the speeding train of emotional reactivity.

2. Never presume: You are undoubtedly smart, but that does not mean you know with any certainty what others are actually thinking or doing. Rushing to judgment might give you a temporary sense of control, but more likely you won’t know enough to get it right, much less solve the problem. Too much runs beneath the surface to understand other people’s position without asking them about their needs, perceptions and beliefs.

3. Be humble: Put on your humility hat. People will often surprise you. A person’s fierce look might not be anger. Rather, they might be concentrating and wrapped up in an internal debate. Your new idea scares them. Or, they simply have a headache. They also could be angry, but that is for you to discover by asking.

Count on resistance. There is a reason why people choose not to share their thoughts with you. They might not even know why they acted the way they did. Plan on a long conversation, or several of them. You both might be peeling the onion.

5. Believe in the endgame: There is no point in entering the painful process of deconstructing something that doesn’t work for you if you aren’t committed to a satisfactory endgame. Most people start with the goal of escaping their misery. However, to arrive at a good result, remember to apply the awkward zone to yourself as well as to the others involved. Learn from what you hear and notice how it affects your feelings.

The Reward for Getting Clear

Taking the time to carve your way through a thicket of confusion by asking straightforward and possibly awkward questions will enable clear, fact-based decision making. It also might make you feel good.

Afterwards you can relax and enjoy the fruits of your labor, so to speak, much like savoring an honest piece of perfect pie.

View from the ground: Some recent articles and interviews:

Leading change: How one woman helped then-fledgling Amazon survive and thrive
Ryan Jespersen of CHED radio interviews Julie Benezet, author of The Journey of Not Knowing, and former director at Amazon.

Dealing with Stress and Uncertainty in Our Chaotic World (interview at 28:16)
Ted Michaels of the 900 CHML Radio Health and Wellness Show talks with Julie about her mission to help peple deal with the stress and anxiety brought on by our chaotic world.

Alive@5
Host David Leonard and Julie talk about leadership, leadership psychology and the challenges of leading in scariness of the internet age.

Taking Chances to Lead Change in the 21st Century: Why It’s Cool Not to Be So Cool
The internet changed all the rules. Life has always had its challenges when new things showed up, but most of the time we thought we could handle them.

Who, Me?
When working on a project, there are various human roadblocks that consistently clog the path to project execution.

Don’t Act Until You React: 5 Strategies to Build Mental Preparedness to Lead Change
To react is human. To honor and understand one’s reactions before acting is leadership. 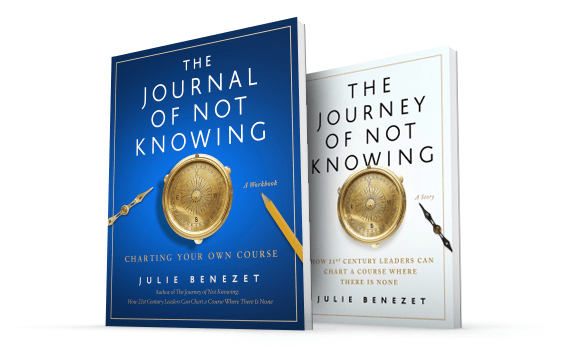